So far throughout the playoffs, I’ve gone 12/14 on series picks (see write-ups here and here) but only 4 of those were in exact games. Still, going 25/29 with 11 exact picks over the past 2 playoffs is pretty damn good. Of those 4 misses, 3 were involving Portland (I still somehow have no idea how good the Blazers are), and the last was picking the 76ers to sweep the Celtics, something this idiot and his cover photo still won’t let me forget. (At least the Milwaukee in 5 prediction quieted him for a short bit).

I’ve been high on Toronto since the beginning of the season. I picked them to win more than 54.5 games (18-12 on my over/under predictions isn’t too bad), and have said they made a great trade and they’d be a significantly better playoff team with Kawhi instead of DeRozan. That may seem like an obvious take now, but there were plenty of people who disagreed. Fast forward to now, and this Raptors team looks to have the best shot at taking down the Warriors we’ve seen since LeBron went into God-mode in 2016. All that is to say that I really, really like this Raptors team…

Prediction: Golden State in 5
This could look like a really silly prediction in a few days, and it’s not crazy to think the Raptors should win at least 2/3 at home (assuming they get to a game 5), but I have to go with my gut and say this is going to be over quickly, even without Kevin Durant. DeMarcus Cousins is returning tonight, and the Warriors are playing the best we’ve seen them all season. Durant gives the Warriors a late game threat that is useful (and needed!) if the game slows down and becomes a half court grind. But the Warriors don’t let the game slow down often, and have won 31 of their last 32 when Durant is out and Curry plays. That’s not to say they aren’t beatable, but the Raptors need to play their best and get a bit of luck to beat this team when they’re playing as well as we’ve seen. The Warriors made easy work of the Blazers, and Curry is catching fire at the right time. He scored at least 36 points in each game of the Western Conference Finals (shooting .469/.426/.938 splits) and was a +42 in the 4 games. Despite having 3 rings and 2 MVPs, he’s yet to bring home a Finals MVP. I think this is the year he does it.

After losing Games 1 and 2, the Raptors barely pulled out a double-OT victory, in a performance that didn’t inspire a lot of confidence. But after that, they won the next 3 to make it 4 consecutive wins against a team that hadn’t lost 3 straight games all season. Kawhi Leonard took this team to another level, and Fred VanVleet surged to push this team to its peak. Nick Nurse made adjustments in defending Giannis that worked out perfectly (aided by a shooting slump from Milwaukee), and I expect him to bring something creative to defending Golden State.

The Warriors have been prone to making careless errors while playing as they’ve consistently been able to overcome them. The Raptors need to exploit these, and bring unique and inconsistent defense. If you give the Warriors the same look defensively for an entire game, they’ll be dismantling it after a few possessions, and you’ll get steamrolled. The Raptors have solid personnel to scheme these types of looks, but their defense all comes back to Kawhi Leonard. He’s their most important defender, while also carrying the load on offense. They’ve had 3 days off, but the Warriors will be fresh with a week of rest, and Leonard has played 66 minutes more than Klay Thompson (the player with the most minutes on Golden State). He’s been a machine, and Toronto will need him to be fully charged to stay with the Warriors.

Keys to the Series

1. Toronto’s Rotations. One of the interesting factors of the series will be how the Raptors decide to lineup against the Warriors. Of course, the Warriors are constantly running and screening, so the starting matchups aren’t necessarily as important as their worst-case matchups, assuming they switch everything – almost a necessity against Golden State. The Raptors have a couple of great options for a switch-everything defense, but it also means limiting Marc Gasol’s minutes to appropriate Golden State lineups if he starts to get burned. With Cousins’ return, maybe Nick Nurse will have him mimic Cousins’ minutes, but I’d guess Gasol starts and Cousins comes off the bench. Either way, I’d expect to see Gasol put into pick and rolls a LOT during this series. 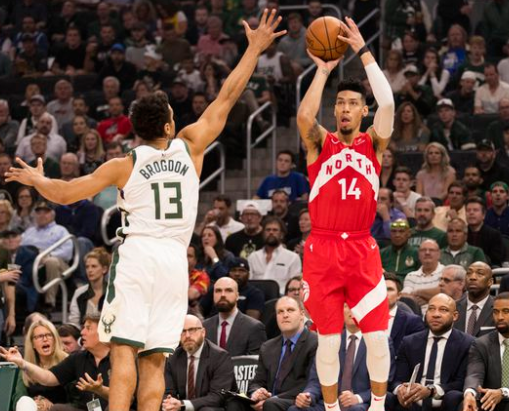 Offensively, the Raptors will try to do the same thing with Kevon Looney and Cousins. Kyle Lowry will need to make the Warriors pay for keeping a big man on the floor, but he’s no Steph Curry. If the Warriors go small, Siakam, Ibaka, and Gasol need to be able to work inside – a tougher ask against Green and Iguodala than most teams. The Raptors bench has been great, especially Norm Powell and VanVleet, and they’ll look to continue that push against a Warriors bench that has looked (relatively) vulnerable. Danny Green was the worst player (aside from maybe Eric Bledsoe, woof) in the Eastern Conference Finals, and if he plays like that again, the Raptors don’t stand a chance. He is a solid defender, but he’s on a cold streak like we’ve rarely seen. The Raptors will need Green to catch fire like he’s used to in the Finals if they want a chance to upset the reigning champs.

2. Three-Point Shooting. Okay, so I know that who shoots better from deep is a pretty obvious “key to the series” but hear me out. We expect Curry, Lowry, Thompson, Leonard, Durant, Siakam, VanVleet, and (personally) Danny Green to hit threes, especially if left open. But what brings either team to a new level is if their stretch bigs need to be guarded to the perimeter. If Draymond Green is making threes, there’s almost nothing you can do. He’s such a great playmaker that if you’re not allowed to sag off him, he’ll blow by you, and if anyone helps, their assignment has an easy bucket. Cousins deep threat presents a matchup problem. If you bring in a smaller defender who will guard him out to the three, he’s going to dominate with his size; If you bring a big man who can bang with him in the post, he’s going to get open for three. You almost have to live with either taking threes and hope for the best.

Similarly, Serge Ibaka and Gasol need to be able make triples in order to space the floor enough for the Raptors offense to work. Ibaka has been scared of shooting from deep, and has settled for a midrange game. The Warriors will likely help off and allow Ibaka to shoot from deep. He needs to. Gasol will likely get more attention, but he’s going to need to come out firing as well. It’s difficult to beat Golden State at their own game, but they’re the best in the league at dictating tempo, so the Raptors will need to be ready. Ibaka and Gasol should force the Warriors to defend them at the perimeter and hope Draymond Green and Cousins don’t.

3. Kevin Durant. The way the Warriors play is significantly different when Durant plays than when he sits, leading to the terrible take that the Warriors are better with him. That’s not true. Sometimes, it’s less aesthetically pleasing, but (like every other team in the league) they’re better with their best player.

If he returns, I don’t know what the Raptors can do to stop the Warriors. If you try to slow the game down and keep it in the half court (a smart – if difficult to achieve – plan), Durant will just do it better than you. He’s an underrated defender (one of the best in the whole league) and uniquely gifted scorer. Kawhi dominated the Bucks by stopping seemingly every run they started by calmly striding down the floor and hitting a contested jumper. He had one of the few series that says ‘screw you’ to analytics and just continually hit midrange jumpers. This is what Durant can do. The Warriors rarely need him to do it, but when they do, Durant delivers.